From a quarter-acre block to vertical living: The reinvention of the Great Australian Dream

The Great Australian Dream of owning a house on a quarter-acre block has been a part of the collective consciousness since the 1950s. Today, the shape of that dream is shifting as more homeowners look to apartments to find their slice of paradise.

Surging house prices have locked many buyers out of the market, particularly in the inner city, where demand is strongest.

Apartments located within a 10-kilometre radius of the city are significantly more affordable than houses in that zone and give residents the same access public transport, cafes, restaurants and shops, and proximity to the CBD.

The 2016 census found there is now around one occupied apartment for every five occupied detached houses in Australia – compared with one for every seven is 1991. Data from the 2021 census is expected to show a further rise in apartment living.

Aside from the cost, there are many advantages to living in an apartment, says Fergus Humphries, Sales and Marketing Director at developer Hamton.

“I think price has a lot to do with it because apartments offer buyers a chance to live close to the CBD in an established suburb at a more realistic price,” he says.

“But the low-maintenance living side of things and a secure lock-up-and-leave lifestyle is definitely a benefit. We’ve seen a shift in the last six months to people having smaller apartments versus a house and then actually having space outside of Melbourne with what’s gone on with COVID, so they’re shifting the way they live. 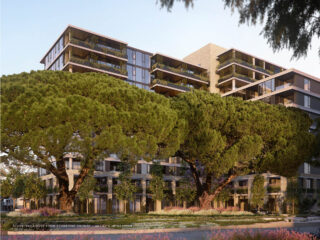 “You can buy an architecturally designed home off the plan and it’s brand new so you don’t have to worry about maintenance. And the reality is apartments are laid out more efficiently than your traditional home. You end up paying for a lot of wasted space in a home versus an apartment.”

Hamton is the developer behind the $2 billion reinvigoration of the Moonee Valley Racecourse, Moonee Ponds. The project’s latest release, Stonepine House, is a 127-apartment building designed by architects at Rothelowman and interior designers at Carr.

A winning attraction for buyers, particularly those who have never lived in an apartment before, the the range of amenities.

Within Stonepine House, residents are spoiled by a hotel-inspired porte-cochere and lobby, a residents garden, library and private dining room, a maker’s studio, bike store and repair zone.

On offer is the neighbouring building – accessible by Stonepine residents – is perhaps the feature most residents will be drawn to: a rooftop infinity pool and entertaining area overlooking the Moonee Valley Racecourse and city skyline. Residents will also have access to a wellness sanctuary and gym within the same building.

Having access to these places when they need them, without the need for constant maintenance, can be refreshing change for homeowners, who often fine they have more time of their hands living in an apartment.

“You’ve pretty much got everything you would have in a family home, just in different spaces,” Humphries said.

Moonee Valley Park will see up to 2000 residences built across 9 hectares of the Moonee Valley Racing Club’s 40-hectare site, with 20 hectares dedicated to green spaces, including pathways and parklands. Stonepine House is expected to be completed mid-2024.