Construction has started on the first apartment building of Moonee Valley Park, with Camillo Builders (Camillo) breaking ground on the second stage of the $2.5 billion redevelopment of Moonee Valley Racing Club.

Hamton Managing Director, Matt Malseed, said that the sale success of Thomas Street to date demonstrates the growing consumer desire for greenery, as offered by the landmark project.

“When we developed the masterplan for this landmark project, one of our key focuses was to dedicate a large proportion of the site to greenery, not only for the benefit of future residents but the whole local community.

“In just over six months, we secured around $70 million of off-the-plan sales at Moonee Valley Park, with 70 per cent of those coming from nearby suburbs in Melbourne’s north west corridor.

“It is great to see how Moonee Valley Park’s various botanical spaces are resonating well with buyers and has translated into strong sales results,” Mr Malseed said. 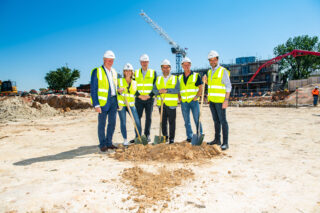 It is evident that peoples’ priorities have changed in the wake of the pandemic with a rise of keyword searches of lifestyle elements, including the demand for outdoor space and greenery.

Recent data from Realestate.com.au shows that keyword searches on the site for listings with outdoor areas have increased by 17 per cent, year on year, with searches for ‘courtyard’ leading the way and doubling in this time. ‘Outdoor area’ was the second most searched keyword in realestate.com.au searches for the Greater Melbourne area, following only ‘garage’ for May 2021.

Realestate.com.au analyst, Karen Dellow, said that “this increase was likely driven by the long periods spent at home during 2020, and the need for additional space. As Melbourne started to return to pre-lockdown activity, searches for listings with outdoor space dropped.

“However, ‘outdoor area’ and ‘balcony’ remain in the top 10 most searched keywords during normal market conditions,” Ms Dellow said.

Geoff Gray is one of the Thomas Street buyers attracted to the project’s location and Moonee Valley Park’s outdoor offerings, including the communal parks, generously sized private terraces, balconies, and lots of incorporated greenery.

“I didn’t initially consider buying off-the-plan but found Moonee Valley Park very appealing in all regards – not just the Thomas Street apartment but the whole redevelopment. I wanted to buy something on the northern side of the building to capture the sun, but as no ground floor apartment remained available on that side, I ended up buying a two-bedroom home on the fourth floor”, said Mr Gray.

Unlike many others, Mr Gray will be making a tree side change by moving from the seaside when retiring to live closer to his family in Moonee Pond’s new ‘neighbourhood within a park’.

“I was very pleased when I came across the MVP project, as the project and its surroundings tick several boxes that suit my active lifestyle. I look forward to being able to play with my grandchildren in Tote Park, be able to go for bike rides with my Regina along the Maribyrnong River and take our dog for walks in Queens Park”, Mr Gray added.

Thomas Street’s six-storey building, comprising 69 residences, is nestled in a botanical enclave within the development. In addition, the building will directly overlook another new open space – the expansive 1,400sqm Residents Garden to create a true sense of calm and seclusion.

All Thomas Street residents will have access to first-class amenities and services, including a dog wash station and the additional option for electric vehicle charging. Via an adjacent future sister building, residents will also be able to enjoy a concierge service, Wellness Sanctuary, gymnasium, a rooftop sundeck and infinity pool with uninterrupted views of Melbourne’s CBD and the Moonee Valley Racecourse.

Residents will be spoilt for choice regarding recreational and active pursuits, with bike paths, walking trails, sporting fields, playgrounds, and green community spaces also offered within the broader Moonee Valley Park precinct, including the already completed 5,000sqm Tote Park, alongside the recently opened TOTE Bar & Dining. The Thomas Street apartments are scheduled for completion in late 2022.

Located just six kilometres from Melbourne’s CBD, Moonee Valley Park is described as a ‘neighbourhood within a park’. Thomas Street is part of a redevelopment that will eventually comprise approximately 2,000 dwellings and become home to approximately 4,000 new residents.

The reinvention of the Great Australian...