In 1882, John F. Feehan’s father Richard leased the family’s farm to Samuel Cox, who turned the land into the iconic racing track, today known as Moonee Valley Racecourse. Over the 138 years since the leasing the Feehan name has retained an honoured position in Melbourne’s horse racing community, including its bestowal on September’s John F. Feehan Stakes horse race. The continuing legacy will soon be recognised with a portion of McPherson Street bordering the $2.5 billion Moonee Valley Park renamed to Feehan Avenue.

John F. Feehan was vice-president of Moonee Valley Racing Club from 1917 to 1948 and was appointed chairman just before his death in 1949. John was a popular figure in the racing community. His contribution to the sport is recognised through his name being linked to one of the most important attractions of MVRC’s annual program, the John F. Feehan Stakes, held in September each year.

Tony and Patrick Feehan, great-great-great-nephews of John F. Feehan, said that it is a great honour for the family to receive a street named after their forebears in an area that has been closely tied to the Feehan name for such a long time.

“I think both John, and his father Richard, who originally purchased the land and used it as farmland, would be proud of how the land and surrounding area has evolved throughout the years.

“Back then, the location of the farm would have been considered quite far from the city, and at the time, there was probably not much out there. Today, Moonee Ponds offers everything just 6km from the Melbourne CBD with excellent public transport facilities to go to the races,” said Tony Feehan. 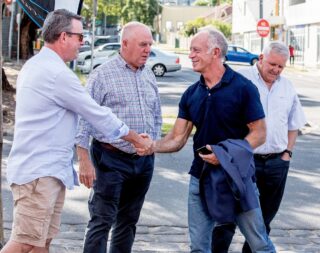 Richard Feehan arrived in Melbourne from Ireland with his parents in 1841 and purchased the land in 1855. The story goes that Richard rode to the Moonee Valley site from Melbourne one Sunday accompanied by Mr John Mooney, who had purchased the land from Robert Hoddle in 1847. During the ride, the purchase of the Moonee Valley land was discussed, and on the return journey, a deal was made. That same week, a deposit was paid, and Richard Feehan took possession of the land and used the 98 acres for a farm and grazing property.

In 1882, Richard leased the Feehan Farm to William Samuel Cox, a noted sportsman, amateur rider, and a successful businessman, who developed the land into a racecourse. In October each year, the W.S. Cox Plate is held in his memory and is the most famous and prestigious race at Moonee Valley Racecourse.

Though he was primarily a cattle farmer, Richard Feehan also has a keen interest in horses and the connection to racing has been a continual thread passed through the family for over a hundred years.

The Feehans of today agree that the development of the racing club on the old Feehan Farm was probably something he would look upon very favourably.

“John F. Feehan’s first cousin, John Sylvester Feehan, was also a well-known racehorse owner with his most successful horse, ‘Mountain God’ winning the Australian Grand National Steeplechase in 1921 and 1922 in Ballarat. His brother, Joseph Feehan, was the President at Shepparton Jockey Club in the late 1910s.

“My grandfather, Richard J. Feehan, was also a good amateur jockey and won races in the Riverina, while my father Richard was involved in racing associations and a judge for many years,” Mr Tony Feehan explained.

To celebrate the site’s longstanding history, the 15-year redevelopment of Moonee Valley Racecourse will transform the iconic Melbourne location to the first-of-its-kind ‘neighbourhood within a park’. 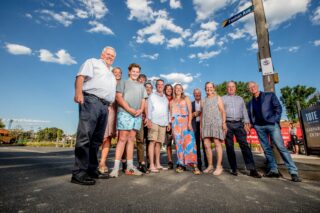 The landmark redevelopment is a joint venture between Hamton Property Group with leading superannuation fund Hostplus, in conjunction with the Moonee Valley Racing Club.

Moonee Valley Racing Club’s Chairman Don Casboult, said “the 40ha site will be transformed into Moonee Valley Park and comprise mixed-use development and community spaces fused with a world-class best night racing venue that will be able to operate for another hundred years.

“The new plans and intent for Moonee Valley Racecourse look great, including making the straight longer while remaining a circuit. It is also a great idea for the community, especially those living on the site, to be able to utilise the green space when there’s no racing,” Tony added.

McPherson Street between Dean Street and Thomas Street will be renamed to Feehan Avenue and be home to the heritage-inspired homes of Feehan Row, located in the Moonee Valley Park precinct. Residences will comprise of 80 premium two-, three- and four-bedroom townhouses and are designed by award-winning architects Rothelowman, with interiors by Mim Design, and landscape architecture by Tract.

Founder and Executive Chairman of Hamton Property Group, Paul Hameister OAM, said that from the outset Hamton’s objective was to preserve and celebrate the site’s history throughout the development.

“We are excited to officially name one of the main streets bordering Moonee Valley Racecourse to Feehan Avenue, as a way to keep the legacy of the Feehan family closely connected to the site.

“Unlike many other developments, Moonee Valley Park is being developed with botanical green open spaces as the primary consideration.

“We like to think that bringing back natural landscape to the area and giving it new life would be something that the original farmer, Richard Feehan, would appreciate,” Mr Hameister concluded.

Residents will be spoilt for choice regarding recreational and active pursuits, with bike paths, walking trails, sporting fields, playgrounds, and green community spaces also offered within the broader Moonee Valley Park precinct, including the already completed 5,000sqm Tote Park and TOTE Bar and Dining. The first stage of the Feehan Row residences are scheduled for completion in 2022.

The reinvention of the Great Australian...